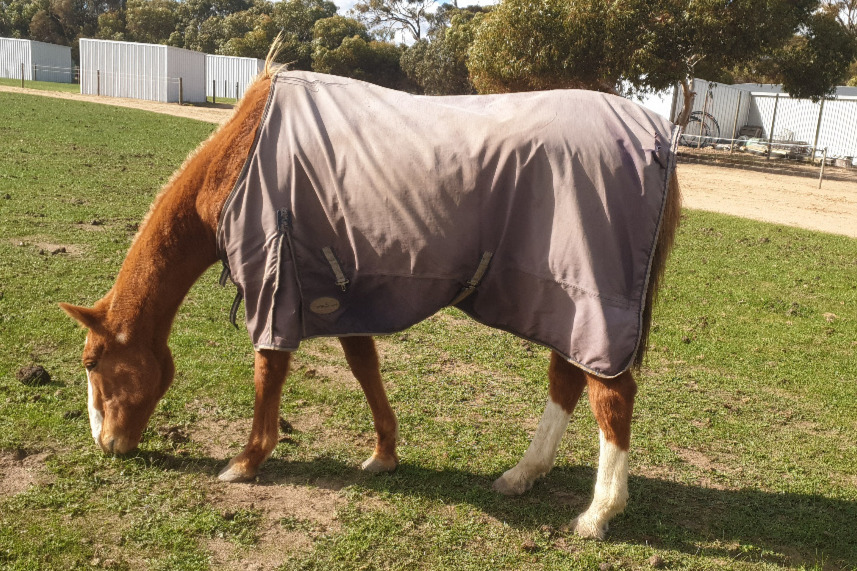 Loving a horse means going through whatever is necessary together – including going through having to lay your equine friend to rest. Alan had to put TEX down on December 5, 2020, and TEX was certainly loved. It’s been a bit more than a week ago and it’s been a long one for sure. We want to share Alan’s reflection on TEX’s life and also want to appreciate that life, as well as the caretaking of the rest of the Calan horses, must go on with as much kindness, gratitude and positivity that we can muster.

Alan, accompanied by Carol, made the trip to first pick up the then 17 year-old TEX and bring him to the sanctuary on June 6, 2012. Over the past 8 years whilst residing at Calan, TEX suffered from a case of what we eventually came to understand as ‘fistulous wither’. Back then, there was very little knowledge about what to do to treat this strange affliction. Friends and supporters would offer concerned comments like ‘all the best with this’ and ‘ be thinking of you and your dear horse’ as old TEX’s wither would erupt with a yellow substance of blood and pus that ran down his shoulders and front legs all the way to his hooves.

It was nearly one year ago, last December 2019, that a supporter and equine healer named Jacqui Addison, performed bodywork treatments on old TEX and a few of our other sanctuary horses, and she had this to say:

“I noticed TEX had a blockage of flow around the withers area and started fascia release treatment throughout his whole body. I was pleased to be advised by Alan that TEX had significantly improved. I treated TEX again in August of 2020 and his response was extremely gratifying. I am very pleased that I was able to provide comfort and relief to a dear old soul.”

In the end, whatever blocks were in old TEX’s body and soul, were too much for him to release. In late November of this year, 2020, he was urinating blood although still enjoyed his tucker. Alan suspected kidney trouble just like Beriah (aka Lightening Jack) and our beloved late Topaz.

Alan found TEX down on the morning of Saturday, December 12, 2020 and it was obvious he was in real trouble and tremendous pain. After multiple attempts to get him standing on all fours, Alan realized it was not possible and that TEX was at the end of his life. TEX became the 12th horse to be buried at Calan Horse Sanctuary.

The blessedness comes from understanding that in every way each horse comes with its own history and issues yet despite that, each horse brings so much joy and love amidst their pain and emotional issues. Alan enjoyed his time with TEX who was a model horse, never kicked, remained still for hoof trims and for the dentist who said it was a pleasure to work on TEX.

Alan gave TEX, as he did the others, a proper soldier’s goodbye- he covered TEXs entire head, nose and ears with a chaffe bag and wrapped his soft body in 3 old horse rugs to protect it as much as possible from being ravaged by ants or dug up at night by wandering and feral animals. Alan’s helpful neighbour Vince assisted him in the burial.

Being the man that Alan is, he takes every horses’s passing very hard- and more so when he has had no other options than to do this deed himself. Yet Alan wakes up every morning and with a gracious and kind heart, feeds and tends to the needs and nature of each horse here at Calan and appreciates the subtle, engaging gestures they make toward him. Big Irish the other day gave Alan 50 extra licks to start the day as sweet little Brodie stood by and watched.

May you keep TEX in mind as he crosses the Rainbow Bridge this holiday season. He is now joins our other Horses In Heaven.

Your support and financial donations matter. Whatever you can contribute to Calan Horse Sanctuary would be put to great use in our raising the funds to help Alan help the horses. Alan turns 82 in January and your gift would be a great way to say both happy birthday Alan! And, we support your work on behalf of horses who you’ve taken in through no fault of their own.

On behalf of Alan and the horses,
Thank you and may your holidays bring much joy and light!
Mae Lee